Being from the Deep South, I’m a bit of an iced tea fanatic. For the record, McDonald’s and Popeyes have great iced tea, followed by Jack-in-the-Box. All of these are better than Starbucks (and less expensive). Much as I enjoy a tall glass of iced tea, I’ve never been much of a hot tea drinker. Well, that might have to change after reading about a new study out of the University of California, Los Angeles (UCLA), which suggests that a daily cup of hot tea may actually reduce the risk of glaucoma.

Published in the British Journal of Ophthalmology, the study evaluated the effects of caffeinated and decaffeinated beverages on glaucoma. Previous studies demonstrated a potential link between both and temporary elevation of intraocular pressure (IOP). The UCLA study aimed to dig deeper and establish a firmer connection. 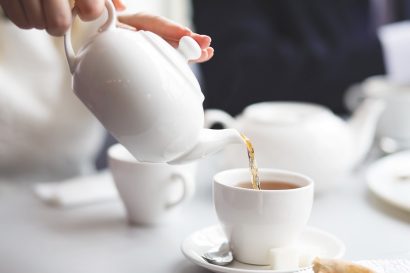 Although the potential link between drinking hot tea and glaucoma risk isn’t exactly clear, researchers suggest that the antioxidants found in hot tea could play a protective role in safeguarding people against increased IOP.

As a drinker of iced caffeinated tea, my first question is why the temperature makes a difference. One theory is less about temperature and more about the source. Most people do not drink homebrew iced tea (I do in the morning but not for my afternoon big gulp). Researchers suggest that bottled iced tea could have other preservatives in it that are counteracting the potential benefits.  (I may have to change my afternoon routine.) Clearly more research is needed about these everyday dietary habits and their effect on eye disease risk.

Another everyday habit that has gotten a lot of attention lately is exercise and the study I discuss below shows a similar connection to glaucoma risk.

A secondary study out of UCLA focused on the role that moderate-to-rigorous exercise played in glaucoma risk. The results of this study — presented at the 2017 American Academy of Ophthalmology meeting — also suggest a strong association between exercise and glaucoma risk.

As with the hot tea study, researchers sourced their survey data from the National Health and Nutrition Examination Survey (NHANES) which studies the health and nutritional status of adults and children living in America. Participants’ exercise habits were evaluated based on self-reporting and the use of a pedometer to measure movement. The results were very similar to the tea study, with researchers finding that those who were the most physically active were 73 percent less likely to develop glaucoma.

Fortunately I’m still a pretty avid runner and gym-goer, so at least I’m getting a bit of potential protection against glaucoma as I age and my glaucoma risk increases. Throw a cup of hot caffeinated tea into the mix and I’m in good shape.

Glaucoma is a serious eye condition marked by damage to the optic nerve and changes in the quality of vision. Many glaucoma patients experience elevated pressure in the eye, but not all. More than three million Americans suffer from glaucoma, and it’s the leading cause of blindness among people aged 60 and older.

Given the seriousness of the condition and its potential to result in permanent vision loss, studies like this that highlight the connection between basic, everyday activities, habits, dietary considerations and lifestyle choices, and risk of eye disease are extremely important. (I’ve written similarly about carotenoids and their role in countering macular degeneration.)

We will continue to track these developments and provide updates as more information is presented regarding the link between glaucoma risk, and hot tea and exercise.