Eye Can See Your Future

It’s said that the eyes are the window to the soul. What you may not realize is that the eyes are also a window into your future; at least in terms of potential health issues. A new study published in Neurology, the medical journal of the American Academy of Neurology, illustrates this by demonstrating how the health of the eye can forecast systemic and mental health issues. 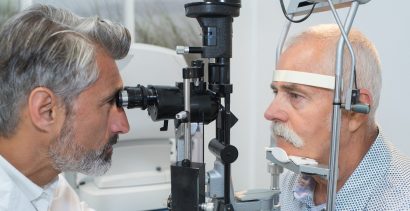 The study found that changes to the blood vessels in the eye could be linked with cognitive decline (aka memory loss) for people over the age of 60. How exactly is such a connection possible? Well, the link between vascular disease and cognitive impairment has already been well established. Viewing the micro vessels in the brain could foretell cognitive impairment. The problem is, the vessels are not directly visible for evaluation and the standard brain imaging methods are unable to “see” these small networks of brain blood vessels. That’s where the eye comes in, because the blood vessels in the eye are actually quite similar to those of the brain. And, the eye is the only place in the body where micro vasculature is directly visible.

More than 12,300 men and women between the age of 50 and 73 participated in the long-term study. It began with all participants completing tests designed to measure cognitive ability. These tests were then re-administered six and 20 years later for points of comparison. The researchers also took pictures of each participant’s retina three years into the study to determine changes that were occurring in the eye microvasculature. I.E. was there damage to the retinal blood vessels?

Jumping ahead, this means that your eye doctor could potentially serve as your first line of defense against memory loss and related cognitive conditions. Moreover, in the last 10 years, many new imaging and diagnostic technologies have been developed allowing researchers and clinicians much better visibility into the ocular vasculature than the retinal photographs used in this study. This technology may allow routine screenings of retinal health to be a window into the future of cognitive function. And like all things health related, the sooner the better in terms of attacking an issue.

Eyes: The Crystal Balls of the Human Body

These findings should not come as too much of a surprise given that we already know that eye health is linked with a number of other general health issues.

Diabetes: The blood-sugar fluctuations associated with diabetes can be significant enough to impact the lens of the eye, which in turn impacts vision. Someone who experiences intermittent bouts of blurred vision, followed by clear vision, may actually be diabetic. Diabetes also affects blood vessels throughout the body. The eye has the most intricate series of bloods vessels in the body, second only to the brain, making diabetic vessel damage particularly troubling for ocular health.

Multiple Sclerosis: Sudden vision loss can be indicative of multiple sclerosis (MS). During a comprehensive eye exam of an MS patient, the doctor would see changes in the optic nerve.

STDs: A nasty bout of pink eye (conjunctivitis) that doesn’t respond to treatment could be the sign of an STD like chlamydia or herpes. Syphilis could also potentially be detected through an eye exam because the disease can change the color of the pupil.

Thyroid disease, cancer, autoimmune diseases… the list goes on and on and, based on this latest study, is still growing. For me the biggest takeaway is something that I preach fairly regularly on Better Vision Guide. Get your eyes tested regularly, especially as you get older when you are at increased risk of developing various eye and general health condition.