Contrast Sensitivity – A Curve for Vision 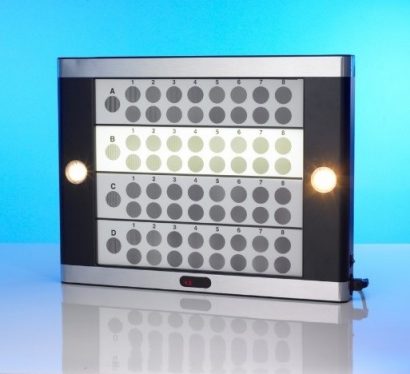 Considerable confusion persists among consumers as to what 20/20 vision really means. I wrote a post on this question last year. To further this confusion, 20/20 is really only one number, whereas vision is much more than one number. Acuity — using the black on white chart — measures how people see only under very high contrast conditions. It fails to measure how people see in the real-world, which includes a wide range of contrast levels. A relatively new test, called contrast sensitivity, is now starting to be used more in clinical practice.

The test can also be conducted with low contrast letters or symbols. And, some doctors add glare to contrast sensitivity to determine how well patients see in bright sunlight or with glare due to oncoming headlights. This combination testing is particularly useful for determining how cataract patients see in the real world, because they can often have good high contrast vision, E-chart vision, but not be able to see well in low contrast settings, particularly glare conditions. (Incidentally, the FDA now requires this combination testing to evaluate new refractive technologies.) The picture on the right shows a test with the glare lights on. You should be able to see a few of the low contrast bar patterns on each row.